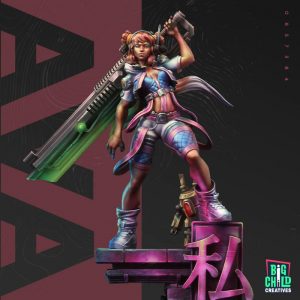 Science fiction miniature painting sets largely represent the lovers of this art. After all, recreating characters and themes from their favorite stories is amazing no matter what.

Therefore, Sci-fi miniatures from Big Child Creatives are the perfect resource to recreate while experiencing the magic of painting your favorite characters. Firstly, let’s know a little about the culture of miniature models.

What are sci-fi miniatures?

Science fiction modeling is a branch of modeling that consists of building models that reproduce objects that do not belong to reality, but can be defined as belonging to science fiction or fantasy worlds. Generally these are plastic models, which are therefore included in the plastimodelism.

Let’s see some of the topics that science fiction modeling deals with:

Reproduces all kinds of models related to space and science fiction, whether belonging to a series or movie related to the subject. Most of them are based on the most famous science fiction franchises: Star Trek, Star Wars and Battlestar Galactica.

Miniature figures of characters related to science fiction. They can be human figures, aliens or monsters.

Robot and mecha models are very popular among modelers, generally humanoid and coming from Japanese manga and anime, as well as from the world of movies and video games, from franchises such as Neon Genesis Evangelion, Mazinger Z, Star Wars or Transformers. The difference between a mecha and a robot is that a mecha is controlled by a pilot, while a robot moves autonomously.

Models related to the fantasy genre are very attractive to modelers and very appealing to the public, since they refer to imaginary, unreal and supernatural subjects.

So, this branch of modeling includes the sub-genres of heroic fantasy or epic fantasy, also called “sword and sorcery”, and role-playing games, both characterized by the presence of mythological or fantastic beings, medieval settings, technologically backward societies, and a strong magical and epic component.

Superheroes and comic book characters, as well as their vehicles, such as Batman and the Batmobile, have a great number of fans among modelers.

Prehistoric animals, especially extinct animals such as dinosaurs, have a large following in the modeling world.

The horror genre, a subgenre of the fantasy genre that aims to provoke a feeling of extreme fear in the viewer, is one of the most popular in movies or video games, from which come many characters and franchises that are commonly reproduced in modeling, such as Freddy Krueger or Dracula.

The 28mm miniatures are responsible for representing science fiction characters exclusive to video games, to be used in tabletop games. They can also be created for the representation of movies, series and sagas.

Most of the miniatures come in sizes larger than 35 mm. However, there are options for all tastes. There are miniatures of this scale that you can get in many themes and styles.

These miniatures are usually made of metal, plastic or paper. They augment the visual aspects of a game and the position, orientation and line of sight of the characters. Miniatures are usually painted and can also be artistically sculpted, making them collectible in their own right.

There is a large collection of science fiction miniatures that you can get from Big Child Creatives. Some of them have a platform, others do not. Also, they come in different models that you can enjoy.

This set has a 75 mm scale and 1/12 busts. It is produced in high quality Bigchild Creatives resin, it is an unpainted model and requires assembly.

Also, like all the sets we will see below, it is not suitable for children under 36 months. This is due to the fact that it comes in small parts and has essential sharp components.

It is a resin kit for scale figures to assemble and paint. It requires glue and paint, not included in the kit. You may need specific tools for scale modeling and putty.

As for instructions for use, those explained below apply to this and all the following models:

This model comes in 75 mm scale and is produced in high quality Bigchild Creatives resin. In addition, it is an unpainted model that also requires assembly. It is the first of a new series of 75 mm figures designed and produced at Bigchild Creatives, which arises to offer the public a new line of Science Fiction figures.

This resin kit for scale figures to assemble and paint. Also, it requires glue and paint, which are not included in the kit. You may need specific tools for scale modeling and putty.

This Ava model features a 75mm scale. It is the first of a new series of 75mm figures designed and produced at Bigchild Creatives, which was created to offer the public a new line of Science Fiction figures.

This figure has a scale of 75mm. It is produced in high quality resin Bigchild Creatives.

On the other hand, this model is 75mm scale. Being the first of a new series of 75mm figures designed and produced at Bigchild Creatives.

Where to get sci-fi miniatures?

Obviously, through our website, you can purchase the best Science Fiction miniatures with attractive prices and promotions.

The miniature you choose depends primarily on your working style and aspirations. But you can certainly take into account the following tips for a more satisfying experience:

Also, miniature packs are produced in almost all genres. Due to the important production links with miniature war games, the most common genres in which the models are manufactured are fantasy, science fiction, and historical/military.

The connection to war games also means that most of the models available are individual characters (sold individually or in unit sets) in offensive or defensive poses. Within the broad genres, there is still a great deal of variation in models produced by different manufacturers or even by the same manufacturer in different lines.

Also, models produced for games can be generic figures or specific variations of common tropes unique to a manufacturer. Manufacturers also typically have a specific house style or aesthetic for the models they produce in all lines as part of their visual identity, so models are easily recognized.

Similarly, models come in a variety of different scales. The size of full-length figures is commonly given in millimeters, although the indicated size of the models is not always accurate due to the slippage of the scale, where over time the models have become larger and are still called of the same scale.

You should also keep in mind that many of these science fiction models come directly from Japan, so it will be difficult to find them in the stores in your city, and even less at these prices. And now, to finish, one last piece of advice: Enjoy your miniature!